Notify me when back in stock

Lubrication by oil injector or premix

(Pictures of old label in first pic and new label in second pic. You may receive either as we have both in stock. Same items just new and old labels)

Motul 710 two-stroke engine oil. This oil is a specially formulated ester-based oil specifically for the late-generation high-performance two-stroke motorcycle engines with TPI And OIL INJECTION of bikes such as the KTM & Husqvarna dirt bike range, and all other performance two-strokes. This oil is the same as the MOTUL 800 the most popular 2 stroke oil on the market but chemically modified to be thinner for oil injection.

More From This Category 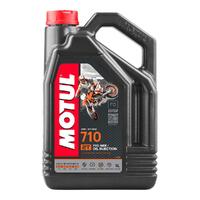