Notify me when back in stock

4-litre bottle of Motul 710 two-stroke engine oil. This oil is a specially formulated ester-based oil specifically for the late-generation high-performance two-stroke motorcycle engines with TPI And OIL INJECTION of bikes such as the KTM & Husqvarna dirt bike range, and all other performance two-strokes. This oil is the same as the MOTUL 800 the most popular 2 stroke oil on the market but chemically modified to be thinner for oil injection.

More From This Category 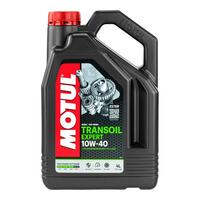